You may have torn your Anterior Cruciate Ligament (ACL) skiing or heard of a football or soccer player with a torn ACL or an ACL reconstruction?

Ligaments attach one bone to another bone, allowing movement while still keeping the bones together. This differs from tendons, which attach muscle to bone so that the muscles can move the bones. For example, the bicep tendon attaches the bicep muscle (Popeye the sailor man muscle) to the arm bone, enabling us to bend the elbow. The Anterior cruciate ligament is a piece of cartilage that attaches the shin-bone (tibia anterior medial side) to the thigh bone (femur posterior lateral side). The ACL prevents the tibia from moving too far forward on the thigh-bone. When I was in PT school over 10 years ago, we did an experiment separating the shin bone from the thigh bone and we watched the ACL rip, much like pulling two ends of a licorice rope until it starts to tear.

We have other ligaments in the knee: the posterior cruciate ligament (which forms an X with the ACL) and the medial and lateral collateral ligaments (that stabilize the sides of the knee) which keep the thigh and shin attached; however, without an ACL the extra sheer of the tibia sliding on the femur can lead to wearing out of the cartilage in the knee.  Approximately 1/3 of people without an ACL (someone who tore it an never got it reconstructed) will develop either a meniscus tear and/or arthritis from the sheering and wear and tear of the excessive movement at the knee. Most people opt to have the surgery, unless they choose to modify their activity. 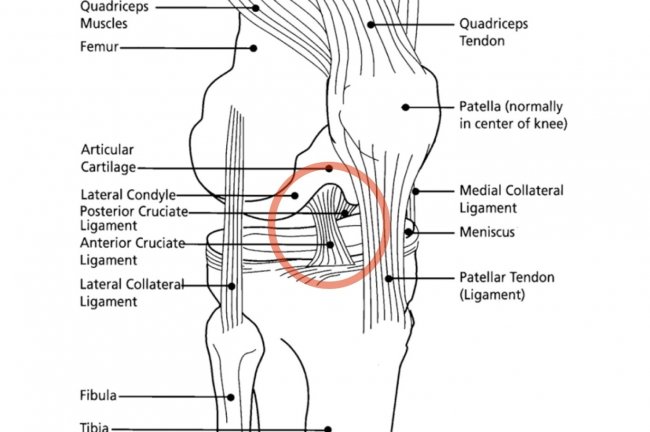 View from the front of the knee. Photo from Wikimedia Commons

I currently have a patient who tore his ACL about 65 years ago. They didn’t repair ACLs back then. At this point his knee is pretty much bone on bone. He has decreased strength on the arthritic side and has developed scoliosis due to the limp he developed to take the weight off the injured side to avoid pain. Our bodies are smart, our bodies attempt to avoid pain through postural changes and changes in movement patterns, even though our brains don’t always agree.

For people who choose to get surgery, most postsurgical rehabilitation protocols enable them to return to sports-specific ac­tivities between 4 to 6 months post-ACL reconstruction with a full return to sports at 6 to 12 months. Approximately 60% of people return to their previous activity post-surgery depending on how active they were prior to surgery. (1)

Approxi­mately 70% of all ACL injuries are noncontact in nature, such as landing from a jump, and 30% are contact injuries, such as getting hit in the side of the leg. Noncontact ACL injuries are more common in sports that require multidirectional ac­tivities, like rapid deceleration, pivoting, cutting, and land­ing from jumps (e.g., basketball and soccer). (1)

Multiple studies have analyzed the biomechanics of jumps and which neuromuscular patterns are prone to injury. Athletes that land on a flat foot with their body weight (center of mass) falling behind where their foot lands (base of support) are more prone to ACL tears upon landing (3). In a static position, a person would fall over backward if their body weight were behind their feet, but in a dynamic movement people adjust by bending their hips and throwing their shoulders forward, causing excessive use of hip flexors and quadricep muscles (front of thigh). This adjustment puts increased stress on the ACL. Thus, trunk control and balance are important to practice and training to avoid injury for both weekend warriors and elite athletes alike.

Several sudies suggest that excessive use of the quadriceps muscle (front of thigh) without balanced activation of the hamstring muscle (back of thigh), especially during eccentric contractions such as landing from a jump may be a main factor in the injury risk to the ACL. The quadricep pulls on the front of the tibia and the hamstring pulls on the back; when working together they balance the force on the knee.

Female athletes are more prone to ACL tears. They also have higher levels of quadriceps activity and lower level of hamstring muscle activity and a slower hamstring activation, which combine to put increased stress on the ACL. (2) In athletes prone to ACL injury, the quadricep had a stronger contraction and the hamstring activation kicked in too late. Thus, the tibia was pulled forward by the quadricep, which altered the mechanics of the knee and ripped the licorice.

Other movement patterns that increase the risk of an ACL injury include a knock knee position (genu valgus), which can have structural causes or exist due to tight calves. Shimokochi and Shultz (1) performed a systematic review examining the mechanics of noncontact ACL injury, which included studies published through 2007. They concluded that noncontact ACL injuries are likely to happen during deceleration and acceleration motions (such as landing and taking off from a jump) with excessive quad­riceps contraction and reduced hamstring co-contraction at or near full knee extension (initial landing). ACL loading was higher during the application of a quadriceps force when combined with knee internal rotation (knee twisted in), a valgus load combined with knee in­ternal rotation (knee in, especially when thighbone is forward and tibia twists in), or excessive valgus knee loads (knee in) applied during weight-bearing, decelerating activities (landing from jump, slowing down from sprint). This again shows the importance of training and practicing lower leg alignment with activity.

incorrect alignment of knees coming together.

As you can see, each segment of the lower extremity kinetic chain, from the ankle to the spine, play a role in injury of the ACL. If the ankles are not mobile, you may land on a flat foot or knock the knee, increasing risk of injury. If the knees are poorly aligned in landing or the quadriceps is overactive, your potential for injury is higher. If the trunk isn’t strong and your weight is back or not balanced over the feet, the risk of injury increases. Neuromuscular control from head to toe is extremely important to avoid injury. Luckily, alignment and dynamic posture can be trained and practiced; motor control is the most modifi­able risk factor.

There are a several other factors in predicting ACL injury including environment (e.g., type of shoe, type of surface) and hormones (for women, at what point during the menstrual cycle ligaments are more lax), and a high body mass index (BMI). Again, however, movement patters are the most modifiable, efficient and correctable ways to prevent an ACL tear.

A contact injury often occurs when someone plants the foot and is hit from the side. Contact injuries are more difficult to avoid; however, if one is flexible and mobile we can hope the ligament and tissues will bend instead of rip. The Medial meniscus is firmly attached to the medial collateral ligament as shown in the knee picture above. Triple triad is when three structures the ACL, medial meniscus and medial collateral sustain injury. This often happens when the foot is planted (stuck to the ground) and there is a forced hit from the side causing the knee to rotate and bend in while the thigh is still going forward. However, even repetitive strain of rotation to the leg with a planted foot can cause injury. We can see this in a golf swing if the ankle is planted and not mobile, the torque will enter the knee. Again, mobility, agility and dynamic alignment are key.

1)    Practice articulation of the feet. 1. Start by bending your knees over your toes, 2. then straighten the knees and dorsi flex the foot by lifting the toes, 3. next rolling up articulating the ankle on to the toes and 4. roll back down to the heel. Coordinate this movement making it smooth. Try not to lean back keep your back upright and hips forward.

roll through ankle up to toes.

incorrect flex: Notice the hyper extension of the knee, with no hamstring engagement and the weight placed behind the foot

In The Gyrotonic(R) method we practice “4 way feet” and articulating the hips, knees and ankles when rolling up through feet and down through heels.

2)   Once all the joints and surrounding muscle are coordinated, then practice jumping. Gyrotonic and Pilates equipment offers a safe and effective way to learn this. In the Gyrotonic method the Jump Stretch Board(R) can assist jumping and then gradually add resistance as the alignment, foot articulation, strength and coordination of the hamstring and quadriceps contraction develop. In Pilates the jump board also achieves these goals. If you do not have access to trained instructors or equipment, start with small jumps and gradually get bigger. Also practice single leg jumps. Then try to jump off a low object (small step stool) a “drop jump.”

3)    Stand on one leg while making an X with the other leg. Keep balance over foot. Watch for knee alignment with knee pointing towards second toe not inward. Change the speed and directions. Notice if the hamstring is co-contracting.

4)    Stand on one leg and lean forward to pick up a ball or shoe. Bend at ankle, knee and hip. Try to keep body upright as long as possible. Repeat on other legs at different speeds with different weighted objects. Keep hamstrings active.

Notice in above photo the left knee is starting to point in, practice keeping alignment all the way down and up.

Take good care of your knees.

A quickie before my next hip post…. Avoiding injury is the key to building bone
July 19, 2015

Exercise and improve your posture during your commute
July 17, 2014

Recent Posts
Categories
Go to Top
We are OPEN!Click here for our COVID-19 Update